Skip to content
Please let me introduce you to…….
Herman – The German Friendship Cake
No I have not gone mad, I completely 100% reassure you that whilst I am typing this I am sane, honestly!
So you are probably wondering who is this Herman dude and what’s his game? and just to put it straight it is not about some “adult” film star…like my man thought when I said Herman is moving in 😉
A introduction to Herman:
Herman the German friendship cake is a sourdough cake recipe which is several decades old. Obviously the mix isn’t decades old but you get the idea! It passes through circles of friends and family similar to a chain letter.
Below is my Herman Journey

Herman arrived in his little bowl and sheet of instructions.
A big THANK YOU to the lovely lady
at Dab and a Dash
who brought Herman into my life 🙂 (I blame you hehe)
The Instructions read as follows:

Hello, my name is Herman.
I am a sourdough cake. I’m supposed to sit on your worktop for 10 days without a lid on.
You CANNOT put me in the fridge or I will die. If I stop bubbling, I am dead.
Day

I took photos of Herman each day to share the progress of him, yes Barry thought I had gone mad (It obviiously was nothing to do with the fact I would say “Morning Herman” at breakfast everyday!) and it caused quite a stir on my Facebook! but it was fun to share the updates and secretly everyone loved hearing of him, I know!

Day Four (After his feeding!) 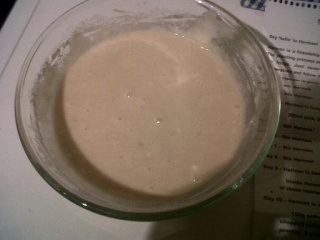 Day Five, Six, Seven and Eight – He looked the same pretty much through out these 4 days so didn’t want to bore you with photos of the same bowl of mix……but can you guess what day the photo was taken? hehe 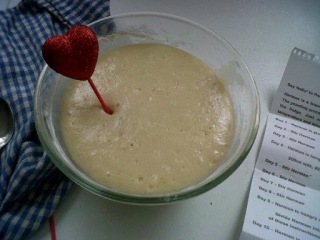 Day 9 – Such a proud day to produce little tiny Hermans that I was able to pass on.

Excitable ladies turned up on the doorstep all ready to receive their own mini Hermans.

Day 10 – Cooking time! I must admit now, that I don’t do baking very often so I was very apprehensive about putting Herman in the oven. I have been scarred by memories of lovely cake mixes that don’t rise and turn out like biscuits, so I broke it to Herman gently this will be the end of him hehe

You may notice that there is no raisins, nuts or apple chunks like the recipe states……I changed it a little and instead I added Raspberries and White Chocolate chunks……yum! 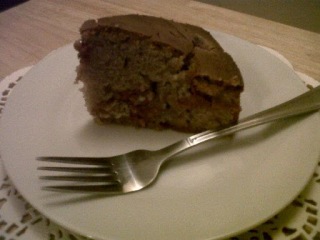 And boy did he rise to the occasion! he was in the oven for 45 mins and tasted delicious!!!!
Ok so 10 days is a long time to make a cake but truthfully I would do it all over again, it was so light and fluffy, and there are so many variations to try!
***
I hope you enjoyed having this brief encounter with Herman!
***
There is lots of Herman info here – including how to start your own, just incase you are interested.
***
Happy Herman Breeding!