Skip to content
Firstly I LOVE Mexican food!
I remember being excited when I was with Slimming World and their magazine featured ways to enjoy Mexican the Slimming World way but now I have discovered Mexican the Paleo way and boy does it knock the socks off SW. It was even tastier, full of freshness and of course full of goodness. This was a celebration meal for reaching my 4 stone loss and what better way to celebrate than the Paleo way!
I had quite a few messages on Facebook asking for the recipes so I thought I would write them all up on here, in one place.
Lets start with the Fajitas, I used Turkey for the meat, fried in walnut oil with one white onion and peppers with a Fajita seasoning. I ditched the traditional tortilla wraps and we used iceberg lettuce instead to use as the wrap.
The sides were Salsa and Avocado Cream.
Instead of having sour cream, I made an avocado cream which….even if i do say so myself….is one of the best things ever! Just take one ripe avocado, one clove of garlic and two tablespoons of full fat greek yogurt, whizz together until lovely and smooth. I like a kick so i added in some green jalapenos aswell!
The salsa was 5 large tomatoes, 1 red onion, 2 garlic cloves and I added in a red chili too all diced together and voila…..see I said it was simple!
We also had some cheese with I found in Aldi, nothing added on the ingredients and full fat. I love saying that, yes I ate full fat cheese 🙂
Then for the pier de la resistance I made some Jalapeno Poppers. Using Jalapeno peppers, slices of chorizo and pancetta. I cut the peppers in half and scrapped out the seeds. Rolled up one slice of chorizo and placed it in the centre of the half pepper and then wrapped in a slice of pancetta. Baked in a hot oven for about 15mins, until the pancetta is crisp. These were so yummy and full of flavour!
I also went all out and made a Cauliflower Mexican rice, I blitzed half a head of cauliflower in the food processor and lightly friend it with onions, garlic, peppers, chili and a spoon of tomato paste.
I could happily eat this all day every day 😉 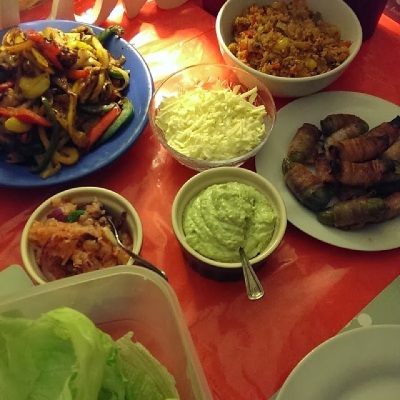