Skip to content
I’ve been meaning to make a paleo tomato sauce for ages but when I spotted these little scotch bonnet beauties at Leicester market, I knew what I had planned for them!
Scotch Bonnet sauce, really tasty with a little kick.
So  I thought I’d share my recipe.
1 onion,
5 tomatoes,
4 garlic cloves,
1 red pepper,
4 scotch bonnets,
2tsp of paprika,
Cup of Apple cider vinegar,
tbsp of tomato puree.
I charred the scotch bonnets and red pepper on my hob to get a little burn on their skins to add some Smokeyness (deseeded both too).
Softened the onions first and then added everything in the pan cook for about 5mins and then blend 🙂
I added the scotch bonnets one at a time so I could gage how spicy it was. In the end I found 4 just perfect.
This is the tastiest sauce I have ever made and so unbelievably simple. I had enough to fill a sauce bottle and then the rest I poured into ice cube trays to freeze.
We enjoyed it poured over steak but it will be delicious with any meats or fish. Maybe stirred through some Zoodles or dipping veggies in…..it’s has endless possibilities 🙂
Enjoy!! 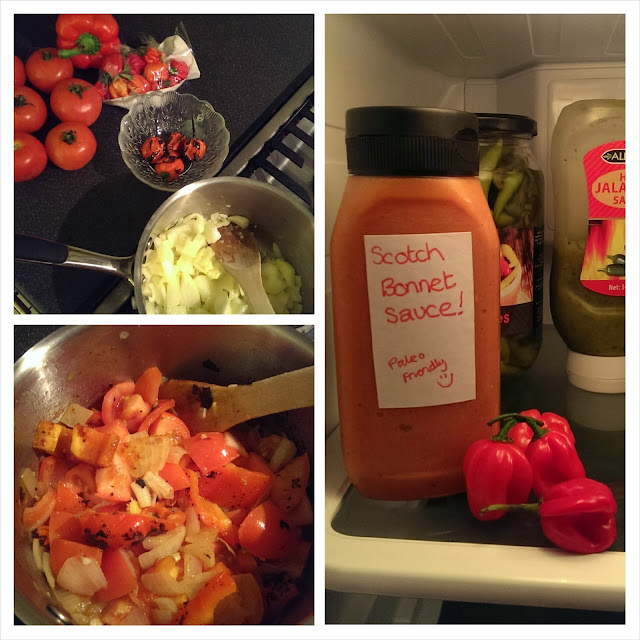